Update 6-02-2019: Thanks to Mr. Eliot Russel from Newcastle (UK) to provide screenshots of chat on telegram with ekaterina dated on april of 2018 and a screen of her profile on tau2.com dated in september 2017,  screenshots added in the gallery. Apparently Ekaterina klimova runs a escort service together with maftuna rakhimova and nasiba boykuzieva.

Real name: Ekaterina Vladimirovna Klimova (Екатерина Владимировна Климова)
Other names used: ledi di, katia klimova, Yekaterina klimova, Jekaterina Klimova, Katia Klim,
Home address: street Khalklar Dustligi 4 Blok 10 72, 120219 Shirin, Sardarya Region
Date of birth: 10-04-1990
Email address used: [email protected],
Skype: katya_klimova3,
Phone numbers used: +998915038009, +15095548543,
Facebook: Klimova Ekaterina,
Other sites: Ok.ru, vk.com, mail.ru,
Description: I found her through the russian site vk.com in february (2016) and we began to chat. After some months and a bunch of sexy pics later, in june, we agree to meet in her place so i make the visa and flight tickets for 10 days. After my arrival in Tashkent i didn’t see her at the airport arrivals, i called her and she told me to meet her in the central square of the city. I took a cab and there she was waiting for me and we went to eat in the restaurant, later she arranged a hotel room for me in hotel international, not far from the TV tower. In the next days mostly the only thing was shopping shopping and shopping, of course i was who was paying for her stuff. On the 4th day i wanted know what was her pretensions, after some while she began tell me the story of the very poor girl who wants to meet a very rich man, to marry with him and go with him to his country, then i knew i was only a walking creditcard and finished to meet with her. When i was with her, the phone didn’t stop ringing and also notifications from sms or whatever, i guess there are more men where she contact with…. Just be aware for this scammer and may be cheater too.
Photos used:

From the Team Antiscam:
Happy New year 2017 and as always we keep you away from scammers.

Description: I meet this girl in february of 2016 on russianbrides.com where in June we meet in real in her city Tashkent. She is a big gold digger and scammer going from shop to shop, clothes from Mango, shoes, perfumes chanel 5, for her I was just a unlimited credit card. Her phone didn’t stop ringing and mostly answering in english, whispering to call later, evidently to other foreign men. After 2 days I stopped meet with her. She scammed me for 1500 bucks.

Description: After we started communicate through asiandating.com she fell in love and wanted marry with me. She explain me when man marry in thailand, he needs to give a dowry in gold or in money to her family and asked me 1.200.000 thai baht dowry, to send through MoneyGram. Because i never met her in real i searched on internet about marriage in thailand and dowry, then it cames out she tried to scam me with the dowry.

Note from the Admin, some time ago we posted an article about dowry scams and how to avoid to be scammed on that way, you can find the article here.

Description: This girl are active on several dating sites finding her “exclusive” sponsors because she likes to live in luxury life. She tells you a very sad story about her, staying without eat, no electricity in the house her daughter not has eat. But i found out she dont have any daughter the photos of the little child she took from her nephew, she dont have any children. Just a ordinary dirty filipina scammer who likes to live luxury life at your expense. The screenshots is made all on the same day, you can check this on her facebook and judge yourself.

Description: She was active on DIA where we started communicate, after some days she began to tell me about her problems with her study, her mother is very sick and needs financial support. Bcoz in past i was scammed, i didn’t trust at all so i began to search her name and found her facebook where on her status was written “In a relationship”, and searching her facebook more deeply i found out with who, with one guy named Đức Anh from the same town where she lives. When i confronted her about this she blocked me. Just another scammer and cheater looking for money and likes to flirt with the whole world. 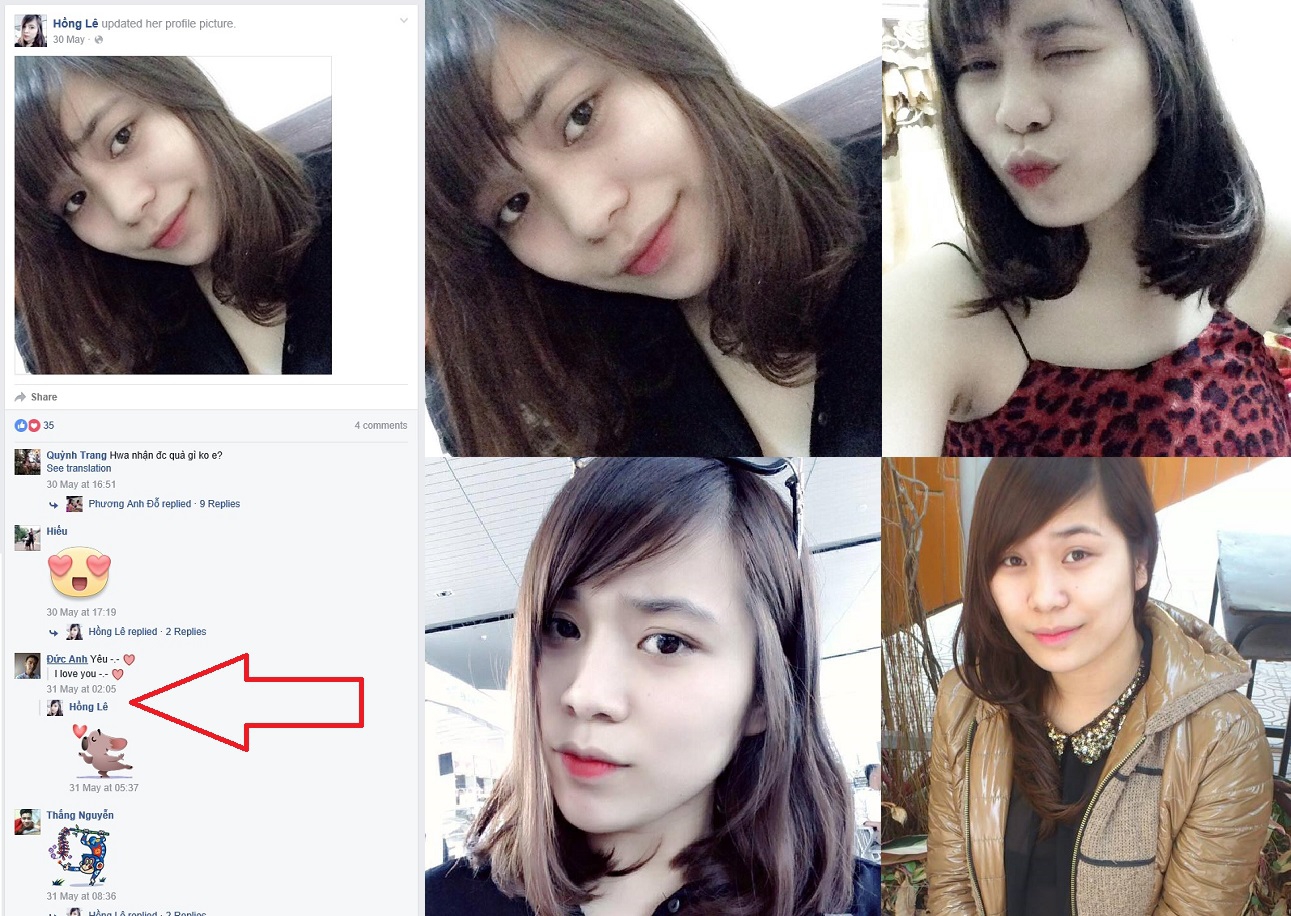 Description: I met her on dateinasia.com, and she started to communicate with me. After some weeks we decided to meet in real in Cebu. When I was with her, the phone didn’t stop ringing and getting messages, supposedly from other men. She don’t ask you money, but you are the ATM for her, to pay for her dresses, beauty salon, her meals and foods for her family… when I stopped to pay for her, she began look like crazy and blaming on me with all. When I came back to the US, I searched her name through google and then found out she is a notorious scammer, liar and player.

Dowry Scam Alert.
We got some reports about people who has been scammed about dowry.

What is Dowry? Source: Wikipedia
A dowry is a transfer of parental property at the marriage of a daughter. Dowry contrasts with the related concepts of bride price and dower. While bride price or bride service is a payment by the groom or his family to the bride’s parents, dowry is the wealth transferred from the bride’s family to the groom or his family, ostensibly for the bride. Similarly, dower is the property settled on the bride herself, by the groom at the time of marriage, and which remains under her ownership and control.

How dowry works:
In some Asian, Arabic or Muslim countries, when the man of the groom wants to get married, he needs to give “dowry” to the family of the groom on the wedding day, this can be money, material things, gold or camels (this last is commonly in muslim countries).

How dowry scammers works:
A dowry scammer will ask you to send money through western union, moneygram or other money transfer service before marriage. Also some of these scammers wants too high dowry, a groom from a poor (asian) family, should get for example between 1000 and 3000 US Dollars dowry, while a groom who is descendant from very rich family or has a straight ties with the kingdom the dowry can be up to 100.000 US Dollars or much more higher. You give the dowry to the groom’s family on the wedding day and not earlier. NEVER SEND MONEY FOR THE DOWRY THROUGH SOME MONEY TRANSFER SERVICE SUCH AS WESTERN UNION, MONEYGRAM OR OTHER BECAUSE THEN THIS IS A 100% SCAM!!!.

Also on this page you can read about the other type of (online) scams.

Team AntiScam
We protect you against scammers!.

Description: We knew each other from DIA in july of 2014 and she only asks about money coz her phone broken, mother ill, for her studies, or another cheap excuse to rip you off, always asking and begging. I sent her goodies such as phone or modems. After i found out she sale this goodies to the pawn shop in her city. Also i found out on her facebook she’s engaged with some pinay guy. She’s a scammer on the first line but also a cheater, jonieza only looks foreign guys to support her and her pinay bf financially coz they loves to have a luxurious life at the expense of others. 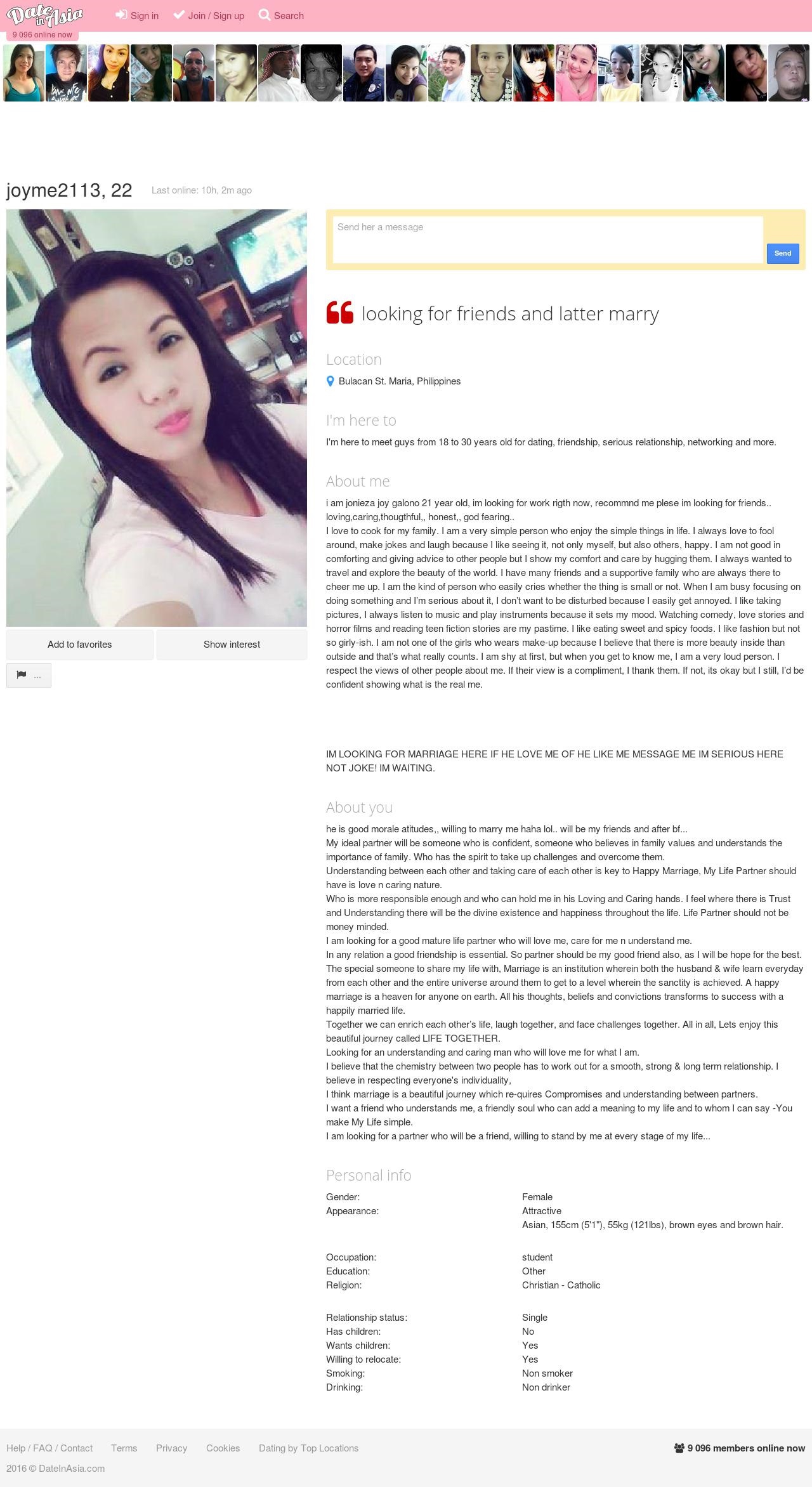 Description: I found her across dateinasia.com in august 2015, on her profile was wrote, looking for my future husband and to get married… We started chat, after we continue on skype, some weeks later she asking me for financial help because she has rent debt and also not more milk for her daughter. I sent her money every month 420 Swiss Francs, this is nearly 20.000 peso and we agreed to get engaged and to marry in january or february 2016. In november i began to suspice her and asked her facebook or instagram profile but i never got from her, when i began search her name on facebook, i found out she was engaged with some guy from finland. I asked her if she not was having any relationship with other men, she wrote me i not was serious and only playing, after she blocked me and can’t send her reply back on skype. I tried to call her on phone but she didn’t pick up the phone or answer my call. I am very disappointed on her.